Four Floors of Gadgets and Gardens in Chicago

If Tyler and Danielle Lenczuk’s remodeled town house has a heart, it’s the multilevel back deck, where the young couple love to grill with friends and family in classic Chicago style. If it has a brain, however, it’s the stack of black boxes lurking behind a closet door in the basement. That’s the control tower for a home automation system that empowers the Lenczuks to adjust everything from heating and lighting to window blinds, music, TVs, and security with a few taps on their iPads. Adding it was one of the many ways architects Jeffrey Day and E. B. Min transformed a nondescript spec house into an urban enclave tailored to their clients’ personalities—although doing so required a few trade-offs. 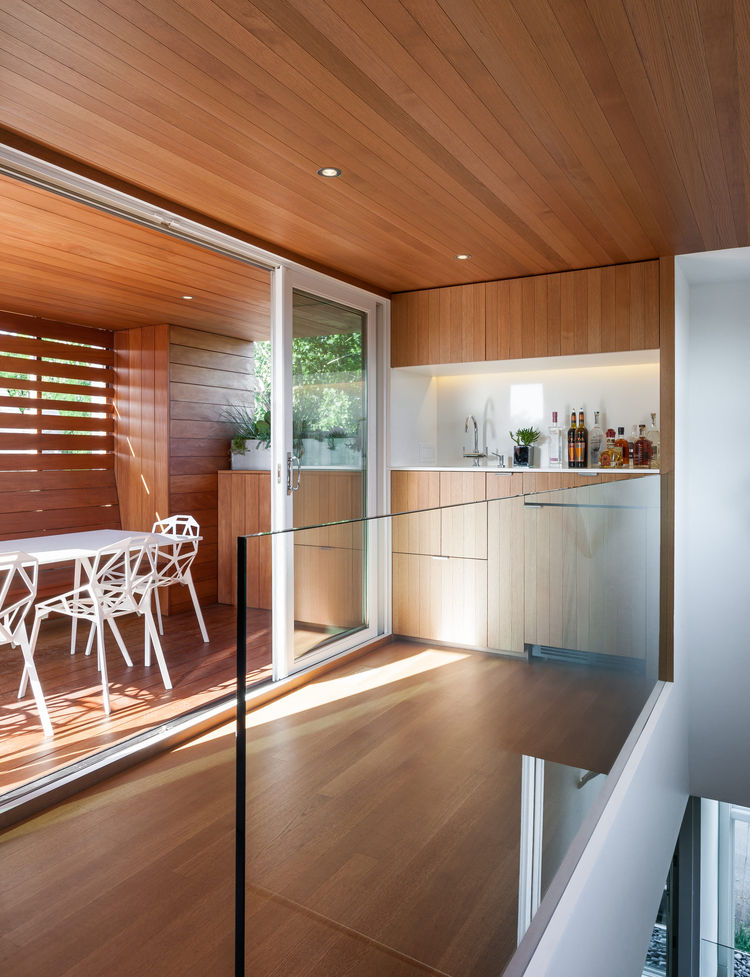 The goal was to make the house work the way the owners wanted it to, but to be strategic about how we did that so the money they put in was of real benefit,” explains Day, whose practice the Lenczuks discovered online. The project started when Danielle moved in with high school sweet-heart Tyler to the brick town house he had purchased in Chicago’s creative Bucktown district. The duo wanted space for their art collection and for hosting gatherings with their sprawling extended family. Yet despite its voluminous 3,155-square-foot interior and spacious decks, the house didn’t serve their needs. “It looked functional, but once we lived in it for a while, it wasn’t,” says Danielle, who owns a gift and paper shop. “We wanted to make it our own.”

The couple liked Day and Min’s brand of comfortable modernism, and they asked the pair—who are based in Omaha and San Francisco, respectively—to select new furniture and fix up the decks, which were already showing signs of deterioration.

The project quickly expanded into an ambitious reworking of the entire home. Although the architects didn’t move any walls or windows, they warmed up the interiors with solid white oak paneling, bracing red highlights, and quirky surprises like motorized liquor cabinet by KWI Cab-inetry that drops out of a wall. They also brought in an art consultant, who commissioned a drawing and sculpture for the home, and Parsons professor Derek Porter, who designed some of the custom lighting, including an installation of fluorescent lights that darts up the stairwell in the entryway.

Bringing smart tech into the mix was a given for Danielle and Tyler, whose interest in the field is more than gener-ational: Tyler’s family business manufactures garage door openers, one of the earliest wireless home devices developed. But fully automating an existing home presented some challenges. While basic lighting and audio systems were already in place, and the existing thermostats could easily be exchanged for self-programming ones from Nest, expanding the network of smart controls required tearing out walls and ceilings. “We had to prioritize what we wanted and what was crazy to do,” Danielle says.

In the case of lights, that meant upgrading the Lutron system in the most heavily trafficked parts of the home, where the wiring was being rearranged anyway, but leaving conventional switches in less frequently used hallways and bathrooms. For the ADT security system, on the other hand, the Lenczuks use a mostly wired system, even though it was more difficult to install, because they wanted to be able to depend on it even if their Internet connection went down.

These fixes ultimately fit into a much broader plan to mold the house to its inhabitants. “It’s not that you walk in and think, ‘Oh, I’m in a smart home,’” says Day. “It’s more that the smart technologies support ease of use and allow it to be a place where you can change moods quickly.” For Tyler and Danielle, that has made the difference between a show house and a home.